Friday night at Place to B, Hugo Spowers was one of the guests for the live session Place to Brief. He was presenting his company Riversimple, which could change the landscape of the car industry in few years time.

Currently cars are designed and developed, such as it is built, used and disposed. And this is what we usually do in our current linear economy. Mr. Spowers business approach is completely different: he is developing a service where people will pay a monthly package for 1 to 3 years, which will include the rent of the car, the hydrogen fuel cost, the road tax, the car maintenance, as well as any needed repairs on the car. The only additional cost for the client will be a fixed mileage rate. “In the eventuality of hydrogen price inflation, it would be an on-cost for the company. And as the car gets older, the cost of the car rent would decrease”, explains Hugo Spowers.

Mr. Spowers also insists on the fact that he will be selling a service and not a product. Simply because if he was to sell cars 100% recyclable, then it would be in his interest to sell short or middle –life cars which are not always repairable. It would make the economical circle spin faster and faster, so that he would be able to  increase the capital of his company. His vision is actually, rather the opposite: he wants to slow down the circle. So he could reinvest the benefits of his company in developing new cars, more energy efficient, and as a consequence increase its capital. The service is not available yet, next year there will be a trial with 20 cars and the company is aiming to start offering its service by 2018. 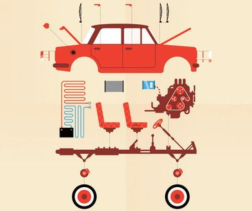 This business model is the perfect illustration of circular economy, so well supported by Dame Helen MacArthur and her Foundation since 2010. According to the circular economy model, the products are designed to be long-lasting, repairable and recyclable. This idea grown in Ellen’s mind after she experienced it sailing on her own across the Austral Ocean. She had to take care and re-use each single resource she had on board. Because what she had taken with her when she started was all she had. Since then, she has been sharing her vision with the entire world; taking part to many conferences, participating to TED talks and trying to inject this model inside multinationals.

From the vision, to the realization, it takes lot of time and efforts. But replacing lines by circles, fossil energy by green energy, short-life items by long-life items is definitively part of the climate change solution. And it is in humanity interest to see this virtuous circular business model start spinning in all types of industry.